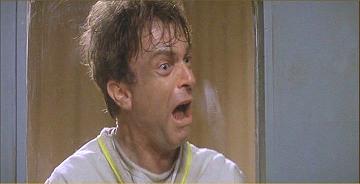 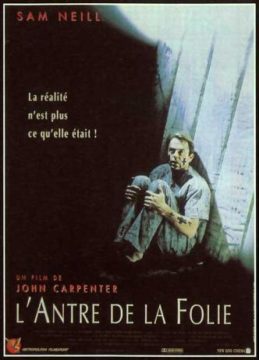 IN THE MOUTH OF MADNESS

Synopsis : An insurance investigator begins discovering that the impact a horror writer’s books have on his fans is more than inspirational. 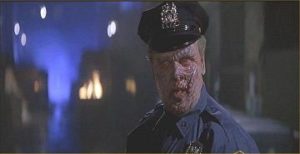 After two bad films for Carpenter, with Memoirs of an Invisible Man and the anthology Body Bags (filmed with Tobe Hooper), the master decides to come back, and will accept two commercial films, two films he won’t write at all, but two good film. In The Mouth of Madness is the first, and maybe his last masterpiece, and the other one will be the remake of the film from the 60s, The Village of the Damned, a nice remake. But with the one we’re talking about today, In The Mouth of Madness, Carpenter reached the top of his art, before going down slowly after that (meeeeh, Ghosts of Mars…). Based on a script from Michael De Luca, who wrote a few years before the pretty sad sixth film from the Nightmare on Elm Street’s franchise, Carpenter tried to tell a story similar to those written years and years before by Lovecraft. And he did it wonderfully. He gave the leading part to Sam Neill. He met him and worked with him on the set from Memoirs of an Invisible Man. Neill, an amazing actor, is just perfect in the role of this private investigator. With a pretty slow beginning, we follow John Trent (Sam Neill), hired by a publishing company to find back their most famous writer, missing. A horror writer of course, Sutter Cane, specialized in horror, with vicious and tentacles creatures we can’t really describe. Yes, pure Lovecraft here!

Trent is after Cane, and the boundary between reality and fiction will take a big hit in the face, and that is the whole point of the film. Reality isn’t what it was anymore! Where is the fiction? Where’s reality? What defines them? What would happen to us if we no longer know the difference between the two? Trent, like many of us, is a very rational guy, everything has an explanation, so he thinks the whole story is a hoax. Yet, reality meets fiction when Trent, accompanied by Linda (Julie Carmen), found the town of Hobb’s End, a city Cane staged in his writings, and a fictional town. For Trent, no doubt about it, it’s just good publicity. The audience, even the most rational ones, can relate to Trent, and the story envelops us from the start, pushing us to understand what’s happening. Slowly, the spectator, like Trent and Linda, are in the heart of Sutter Cane’s new novel, named In The Mouth of Madness, and the concept goes much further with questions about the fans, how they react to art, to creation. Sutter Cane, wonderfully played by Jurgen Prochnov (Beverly Hills Cop 2, Das Boot, or films like… House of the Dead, Maniac Trasher…) thinks he is the new God, and the fans, by believing his stories, give him more power.

Like Trent, the boundary between fiction and reality is thin, and will be increasingly hard for the viewer. But till the end, he’ll try to keep his feet on Earth, rationalizing everything he sees, even the impossible, but after a while, seeking to repress what we see, isn’t it the first step to madness? Trent will learn, as the viewer, with a very interesting ending. Sad to know, once again, that the film didn’t do well at the box office, and isn’t even a well known film in the career of John Carpenter, because In The Mouth of Madness is a great film, maybe one of Carpenter’s best, and definitely his last masterpiece. A movie we can see again and again to unlock all its secrets.

A mood and story like in the Lovecraft’s novels

So: One of Carpenter’s best. Interesting story, interesting atmosphere, with a perfect Sam Neill, as always.