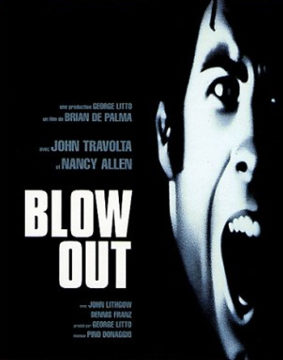 Story: While recording sound effects for a slasher flick, Jack Terri (John Travolta) stumbles upon a real-life horror: a car careening off a bridge and into a river. Jack jumps into the water and fishes out Sally (Nancy Allen) from the car, but the other passenger is already dead — a governor intending to run for president. As Jack does some investigating of his tapes, and starts a perilous romance with Sally, he enters a tangled web of conspiracy that might leave him dead.

The early 80s, the beginning of glory for De Palma. After stunning films in the 70s like Phantom of the Paradise and Sisters, even if unrecognized when there were released, De Palma will reach finally more glory in the 80s, with great movies, such as Body Double, Scarface, and of course, the film we are talking right now, Blow Out. De Palma, in great shape as always, gave us a story inspired by the film Blow Up, and took the opportunity to develop his own themes, such as conspiracy, manipulation and everything else we love about him. When the film starts, we are watching a movie clip from the film Jack (John Travolta) is working on. A kind of a bad horror movie, with bad sound effects. We are, like Jack in the room, the audience of the movies he’s working on. And bad movie or not, we notice already the great directing from De Palma on this opening sequence, and the « mise en abime », which will return during the finale. Long POV shot, subjective one, shower scene, no doubt, another tribute to Hitchcock here!

Then the film really starts. Jack is outside, with his equipment, he records sounds for the film. And, accidentally, he records the sound of a real car accident. And this sound is the trigger for the story, but also for its driver. Jack will become friend with the survivor, Sally, first by interest, then something else comes up from their relationship. Something stronger of course. The characters are extremely well defined, written and interpreted. Travolta is back in a film from De Palma years after Carrie and its probably his best role. Let’s not forget about Nancy Allen, years before Robocop, and we all know female parts are really important in De Palma’s work, and Blow Out is certainly not an exception. The character reveals itself gradually, and we discover the past of Jack at the same time as Sally during their investigation. The story moves slowly, takes its time, but it’s never boring, for the simple reason that the whole is realistic, and directed masterfully. The shots are always ingenious! The lighting of the film also helps, like this wonderful red light for one of the murder!

And on top of all that, we can add a suspenseful story, very compelling, good actors, good dramatic stake. The film can also count on the score from Pino Donnagio, who worked already on Carrie, but also The Howling, and later, Body Double. His music is perfect, making more tension when necessary, without trying to do too much (the fatal mistake that happen later to Mark Isham on The Black Dahlia). The film culminates in a sort of chase, on foot in a train station (partly redone again with virtuosity in Carlito’s Way). Without being the masterpiece of the director (almost), Blow Out easily ranks itself among his best films, beautifully directed from start to finish, with a surprising start, superb suspense, excellent final.

A masterpiece from De Palma

Travolta in one of his best role

The music from Pino Donnagio

So: Blow out is a beautiful piece of art, with a great story, great director, a perfect Travolta, full of suspense and with a great final!