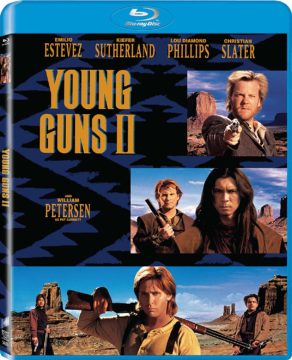 
Story: A year after the events of the first film, Billy the Kid and his friends went separate ways across the country. But the government wants peace and order. The governor gives a chance to Pat Garrett, an old friend from the Kid, and gives him the order to kill him.

In 1988, Young Guns, with a budget of only 11 millions, brings 44 to the table. A success, so a sequel was bound to happen. Screenwriter and producer on the first film, John Fusco starts quickly working on this sequel, keeping its key point, meaning he wanted to be true to the real story, the story of the Kid. But he had to make some changes during filming, some actors can’t be here full time because of schedule conflicts, as it’s often the case. The story changes then for Young Guns 2, but the film uses many archives for some of the dialogues of the Kid, and uses the fact that Bill Roberts claimed he was the Kid, who didn’t die by the hands of Pat Garrett. Real fact or not, we still don’t know nowadays. If the film tries to be realistic with its story with this legend, real or not, the fate of some characters changes drastically, and some changes happen in front and behind the camera. And some bad points from the previous entry are simply erased here. Christopher Cain doesn’t come back to direct, and he’s replaced by Geoff Murphy. Able to do the best like the worst, Murphy was still at a good point in his carrier there, with Freejack right after this movie, way before he did Fortress 2 with Christopher Lambert, and then to become a second unit director on some famous films like The Lord of the Rings. The same goes for the musical score, bye bye the classic and effective score from the first film, and say hello to Alan Silvestri, who did an excellent job there. In front of the camera, if the main cast is back, with Emilio Estevez, Kiefer Sutherland and Lou Diamond Phillips, the cast is way bigger this time, and not with unknown actors. Next to the Kid, we can see Christian Slater, Alan Ruck and a young Balthazar Getty. On the opposite side of the law, William Petersen comes in instead of Patrick Wayne to be Pat Garrett, and we can find a still unknown Viggo Morttensen next to him, or James Coburn (who portrayed Garrett in Pat Garrett and Billy the Kid from Peckinpah). We can add the delicious presence of Jenny Wright (Near Dark), and we have a nice team there. As for the budget, it goes up, 20 millions.

Everything is here to make of Young Guns 2 a great sequel, or at least a film as good as the first. Is it the case? Well, since my childhood, I always liked and in fact preferred this second film, and if on some point, it’s indeed way better, on some others, the film is less rigorous, mainly in its screenplay. The first major change here: the humor. There are way more jokes in this one, just like if Emilio Estevez could do whatever he wanted to be the Kid. So in a way, it’s way more fun that the first one, but it can disappoint people who wanted another flick like the first one. The pacing is way better, it often feels funnier, lighter (except for a few darker moments), even the directing is better. Proof of that? Just the opening scene, with some empty desert, and suddenly, a lonely rider appears, and the music from Silvestri rises up. Magical. When after only a few dialogues, the camera zooms on the eyes of an old Bill Roberts and finally gives us a long flashback (the entire film in fact), and the main theme arrives, while a few riders are riding fast in the American’s west, those are great images. But Geoff Murphy is also a good action director. Those are not the best, definitely, but they entertain, and some moments are pretty violent even, especially for some key characters. And so, unexpected deaths, even if the story is kinda cliché and predictable. This hunt, the fact that the main characters run away from the law has kinda fatalistic side to it. Maybe the jokes from Estevez are here so the movie isn’t too dark actually, and make the film a western for a wide audience.

For me, it worked pretty well, even if Young Guns 2 won’t be remembered as a great western, or in movie history. But you can’t not like it, because of its pacing, the fun jokes, the excellent casting. And no, the fact that we see Jenny Wright’s butt is not the point and doesn’t change my review, I like the film even without that. Even if it’s pretty nice to see, but that’s another subject… With only 100 minutes, Young Guns 2 is a really nice western, maybe yes with some bad sides to it, but also a lot of great scenes, funny parts (what happens to the sherif, or the scene when the judges and his friends bet on the Kid). It’s fun to see the band again, as well as the new ones. And we forgive Silvestri to use, in the end, some tracks that remind us a bit too much of his work for Predator 2 the same year. But as the rest is great, yes, we forgive him. I even want to say that Young Guns 2 is way better than the first film, and it’s pretty rare in the movie business. Big difference with the first one also, the fact that the script deals way more with the Kid, leaving Doc (Kiefer Sutherland), Chavez (Lou Diamond Phillips) and the rest of the gang in the back most of the time, when the first film was more about the gang as a whole. Lots of characters here, often by great actors, but often in the back so we can see more Estevez. But after all, after the events of Lincoln, it’s the story of the Kid here, and not the revenge story of the gang. The gang follows him, to survive. Yeah, it’s a pretty fun western.

A lot of characters stays in the dark
The climax, a bit too simple