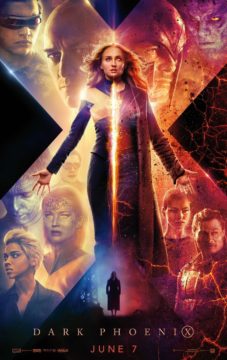 
Story: In 1992, the X-Men respond to a distress signal from the Space Shuttle « Endeavour », which has been critically damaged by solar flare-like energy. While saving the astronauts, Jean is struck by the energy. Miraculously, she survives the blast and absorbs the energy, saving her team’s aircraft from destruction. However, as a result of the energy, her psychic powers are greatly amplified, and her emotional state begins to deteriorate, leading Raven Darkhölme to scold Xavier. As she becomes increasingly distressed, Jean’s powers continue to become harder to control. She accidentally unleashes her power on mutants celebrating the victory in space at Xavier’s school.

Ah Dark Phoenix. Maybe I was the only one, but I was waiting for it. Because even if I’m not a fan (at all) of all those super hero flicks, I liked the X-Men. Not all of them of course, some are pretty bad, like The Last Stand, the third one made by Brett Ratner (entertaining, but nothing more), or the first Wolverine film, maybe the worst of them. But there is something I really like about the X-Men. Maybe the fact that, while being entertaining movies, they also have things to say. At least in the first place. And I won’t lie, since X-Men First Class in 2011, it was for me even better, it told us interesting story without using fan service with the character of Wolverine. Plus, in First Class, it was Matthew Vaugh (Kick-Ass, Kingsman) behind the camera and also behind the script, there was Kevin Bacon as the bad guy, an epic score by Henry Jackman. And also an entirely new cast that I like, with James McAvoy, Michael Fassbender and Jennifer Lawrence. Yes, First Class is my favorite entry in the saga, with Logan. After that, it wasn’t that great for me, but it was still interesting, with Days of Future Past and Apocalypse, a film people hate, with many flaws, but yup, I liked it. Dark Phoenix was supposed to be important in that world, for many reason. First because Simon Kinberg, screenwriter on many films and producers since the third one was now the director. Important yes because he tried, after the cancelation of some events in Days of Future Past, to give a second chance to the story of the third film. Important because it was the end of a cycle, with the 20th Century Fox being bought by Disney after producing all of the films since the first one.

And as for many other reasons, as for the MCU, as for Star Wars, I can say it. Disney, I hate you! Because Dark Phoenix is far from being perfect, but it remains an entertaining film, doomed even before release by Disney. Yes, 3 (maybe 4, I’m loosing it) delays, before finally an official and final release date, 3 weeks before the big event called Avengers End Game, just to be sure the film bombed at the box office. And it happened. 65 millions only on the US territory, for a budget of 200 millions. Disney doesn’t like loosing money, but when they bought back 20th Century Fox, Disney wanted to do something with the X-Men, like, put them all in the big MCU’s family. So this bomb at the box office, it’s pretty good for them, they can just wait a little and reboot the entire franchise. And if Dark Phoenix is a financial flop, and a few reviews were really bad about it, part of the audience liked it, like me. Dark Phoenix takes place in the 90s, after Apocalypse that took place in the 80s. Charles Xavier is still here, still bald, and still the director of his school, still with Mystique around him, and Hank, Scott, Jean Grey, Storm, Quicksilver and a few others. The cast is complete. Yes, do not fear, Magneto is still here, again. The film makes the weird decision to tell us again the story of the birth of the Dark phoenix, the other part of Jean Grey, this destructive and powerful personality. But Simon Kinberg doesn’t deliver again the same story as the third film, no. His story takes place in the 90s, there is no Wolverine in the cast after the events of Apocalypse, he gives the film a new bad guy… well bad woman, some new plot twists and more.

Personally, I had what I wanted from this Dark Phoenix, despite actual and obvious flaws. Flaws in the story, and the fact the movie probably wants to do too much, with several little stories. On one side, you have Jean Grey and her new powers she can’t control, but also as I said a new bad….woman (Jessica Chastain) who wants to invade and destroy the world, and a lot of others little twists coming into the story, like always, with the trust between humans and mutants. Probably a bit too much, and a lot of points are barely in it. But nothing too bad. Magneto comes back in the story and for once, he doesn’t want to destroy the world, and that’s a good point. Jean Grey has a pretty predictable plot but satisfying (for me), and Sophie Turner is pretty good in her part. Even Xavier, still James McAvoy, delivers a few interesting moments, some moments never explored before, with his work for the government and his big ego about the whole situation. Interesting. Less interesting, like in Apocalypse (the previous entry) is the bad guy of the story, Jessica Chastain, with a minimal development and a ridiculous screen time.

That was for the script, the story, the basics. What about technically? For his first film as a director, Simon Kinberg does a nice job. Not perfect, with some dialogues being filmed rather simply, but with some other beautiful shots, and some nice action scenes near the end. The fight between Jean Grey and the rest of the X-Men is pretty good, and the final scene in the train too. Nothing to be ashamed of. Special effects are also actually quite good, and at least better than those from Apocalypse. Some of them were bad, or let’s say seemed unfinished in Apocalypse. Not the case here. And Simon Kinberg found a good team around him. Mauro Fiore is the director of photography (he worked on The Island, Avatar or Training Day), the editing was done by Lee Smith, who works with Christopher Nolan since Batman Begins (but he started a while ago with… The Howling 3… damn), and Hans Zimmer does the score, and it’s a magical one. We’ll see what he does for Dune next year. But let’s go back to this hated Dark Phoenix. During 110 minutes, and it’s rather short nowadays for a blockbuster, we have what many X-Men’s fans want, with super powers, fights, special effects, characters we know and love, all that in a film that yes, doesn’t fully work on all levels, but a film made with good intentions. Even if it was a box office failure, even if most reviews hated it, Dark Phoenix is not a film to be ashamed of. A basic entertaining flick in a way, with too many things to tell, too many characters, and too little time. Too bad the X-Men ends with this one anyway, we could expect way more for a final movie.

Jessica Chastain, underdeveloped and not that useful
Too many things for such a short film
So it’s over now?

So: Again, I’m here trying to say good things about a film that bombed at the box office, and a film many people hate. Dark Phoenix is not perfect, it has its flaws, a lot even, with some bad characters, too many story arcs, and as final film for the franchise, it’s disappointing. But it’s still entertaining, has a few nice ideas and scenes, and is nicely filmed.