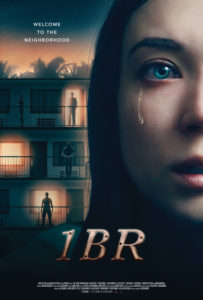 
Synopsis : Freshly arrived in Los Angeles, Sarah moves into an apartment in the Asilo Del Mar’s complex, and meets her new neighbors. At first, the girl struggles to fit in, and notably refuses advances from Brian, a next-door neighbor.

If mainstream genre cinema is only the shadow of itself nowadays, with big pictures on the screen quite regularly, and we can thanks Blumhouse for that (or not, because some interesting films fortunately stand out from the crowd), it is often necessary to turn to independent cinema to find small pearls, which in addition to the fact that they show way more originality in the plots and how to film things, they often benefit from a darker and more violent tone. Yes, budgets are lower, visibility from the audience as well (no release in multiplexes all over the world), and things often have to be done in a hurry. But often, directors shine in this exercise, since, like, forever. When you think about low budget independent horror films, how can you not think about some of the greatest flicks from John Carpenter during the 70s and 80s? And for like the past five years, it has been the same. We can even say that 3 directors clearly stand out, each with two films to their credit so far. Panos Cosmatos (Beyond the Black Rainbow and Mandy), Robert Eggers (The Witch and The Lighthouse) and Ari Aster (Hereditary and Midsommar). But I’m clearly digressing here, and let’s talk a little bit about 1BR, a film shot in a hurry, on a low budget, and which is the first feature film by writer and director David Marmor. Almost behind closed doors in a residence, it highlights the young and still unknown Nicole Brydon Bloom, a young woman who has left her family to settle in Los Angeles and who has a not-so-exciting office job. And who suddenly looks for a new apartment to settle down and finally do something with her life. Recently, the social dimension has been growing in cinema, and in particular in genre cinema, whether it is pure horror, or in the case which interests us, the dark thriller which threatens to sink at every moment in graphic horror, but avoids it as much as possible so the tension stays there for us, the audience.

Well done David Marmor on this point. He never takes the easy way. He has things to say, he knows what he wants to show us, and that’s just what he did. At first, the film tackles an element that we have more or less all known in our life, namely to start life from scratch in a new city, with a first job which is not necessarily for us but well, you have to live, you have to eat. Visit of an apartment to find a good compromise between what suits you and what you can afford. Los Angeles is the perfect city to highlight this element. The city of angels as it is called, the city that sells dreams, a double-edged sword. No need to situate the plot in the world of cinema (which would have been the easy option, and full of cliché) to convey his message. 1BR avoids the pitfalls, and its opening is a simple as engaging, especially if you don’t have a clue where the footage wants to take us. The arrival of the heroine, Sarah, at the residence of her dreams shows another key element that we all know, namely to integrate a community, into a neighborhood. Of course, it’s a thriller, so things won’t go as planned, and very quickly, Sarah finds herself captive of this community, which intends to teach her her way of thinking. A sort of religious worship, without going too far into it, to give the film a rather realistic aspect and gives us shivers down the spine. An element which could therefore very quickly have diverted the footage towards amore visual style. We think in particular of « Torture porn » like Hostel or Saw, with this captive character who must obey or be punished. But if there is abuse, nothing really brutal, visually. The violence is more psychological here, and gives the impression that the director had time to mature his film, rather than wiping out a script and shooting it in a rush.

Even when the film turns completely into an oppressive one behind closed doors, the film only follows its story, and continues to explore the same themes. In the end, this community is a bit like everyday life in big cities, on this so-called elite which does not want to be mixed with others, and wants to convince them that what they are doing is right, and that whatever happens, they are right, because they are the elite. And like any « sect » (yes let’s use that word), it is so easy to target on young people, whose situation is not totally fixed, and who are even more weakened by their situation. Lots of good things in the background of this 1BR, which fortunately has absolutely nothing to be ashamed of in terms of visual either, as the film couldn’t be more classy. Admittedly, the places are most often reduced to their strict minimum, some sets are visually stripped, on purpose (the room in which Sarah is locked for example), but the whole thing never goes into gratuitous violence, and never use any stylistic tricks that could have destroyed the film and its purpose. The tension works, and we must salute the portrayal of young Nicole Brydon Bloom, the film’s revelation. Even the finale, which could easily have gone into excess, or simply crashed miserably, works pretty well. Looking forward to seeing what the director does next anyway, hoping he would have a bigger budget by then, which might allow him to tell stories on a larger scale. Admittedly, 1BR lasts 90 minutes, and a few moments seem rushed, like the way the film goes to the second act, which is just suddenly there. But now I’m quibbling, but 1BR, although imperfect, is an effective thriller, and has something to say.

Nicole Brydon Bloom, the discovery of the film
A film shot simply
Some nice tension there
What the film has to say, and how it says it

Some easy tricks in the script
Some scenes are kinda rushed

So : David Marmor, for his first film, does a pretty good one. He doesn’t choose the easy paths (no gore film), he thought his film nicely, and if it isn’t perfect, it’s a nice thriller.