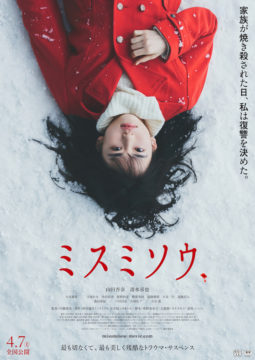 Films taking place in snow, it’s so rare that when it occurs, I run towards them. Literally! Yes, snow in the movies, it’s cool, it’s pretty. Snow in real life, it makes some funny noise under your feet, but after that, it pisses me off, when it melts, or worst, when it becomes ice! The movie of the day is called Liverleaf internationally, Misumisô in its home country, Japan! As always (oh yes…), it’s an adaptation from a manga, but the film already has a good point, it has a director who dares to try stuff, who knows how to handle his camera, and who isn’t afraid to be bloody. I talked about him not so long ago (in a review in French, sorry) about his movie from 2014, the interesting even if far from being perfect Puzzle. And this time, in 2018, he’s back, to talk to us again about bullying at school, with a revenge movie very classical in its premise and narration. At least during the first 90 minutes. And Liverleaf is the perfect example to prove that being classic doesn’t mean to be a bad film, as long as you know what you’re doing. And Naitô Eisuke knows what he’s doing. It’s slow but interesting because very well shot. It goes a bit far but it works because actors are invested in the project. We follow the daily life of Haruka, who arrived recently in this little quiet mountain town (yes let me quote a song from South Park for this please!) after leaving Tokyo. All the clichés are here of course, with the bullying from her classmates, for an unknown reason (at first). One particular group loves to bully the sweet girl, a group leaded by Taeko and her wonderful red dye. And things are going to get worst when Haruka, having a simple walk outside with her only friend from around, Aiba, goes home and simply discover her house on fire. The main problem, her parents and her little sister are in the house. And the little sister, badly burnt, is the only survivor. The other problem, well, the fire wasn’t an accident, and Haruka will take pleasure having revenge.

Yes, I’m not gonna lie, the story is pretty simple. And yes, the director already talked in the past about bullying at school. But the atmosphere is really good, slow, heavy also. Young Yamada Anna, who only has here her second part in a movie, and she was only 17 when Liverleaf was released, is totally convincing despite her lack of experience. First simply a victim of harassment, she then will fall into depression following those events (you know, the death of her family), and she even stops talking. At all. And when her classmates don’t let go, despite those big events in her life, she will simply return the blows, by chance first, but then with a little practice… One amazing thing is, from her first steps on the path of vengeance, the film, which was already cold in the way it was directed, showing us events and characters, decides to visually brings the snow into the mix, until the end. This snow, so white, so pure, well it won’t stay pure for a long time, because it will find itself stained with blood red. Abundantly. Haruka takes whatever comes her way and goes free, bursts eyes, cuts nerves, smashes head with metal pies, uses knifes to open stomach and so much more. Liverleaf isn’t shy about the violence, the visual and frontal one, far from it. And it’s strange, because in a way, it’s fun to see Haruka going that far, but on the other hand, some deaths are really brutal and painful. Yes, death scenes are often real short, it’s also often a bit over the top, but it works. Without revolutionizing the genre, Liverleaf does things right. So, where does it stuck? In it’s last 30 minutes, when the film decides to reveal its final cards, and turns the village into a copy of Twin Peaks but where all the people there could be Bob, all would be potential psychopaths.

The only answer from the movie to be more than other movies from the genre is simply to do always more, more and more, and so the characters that we thought were pure or at least a little innocents in the beginning are in fact the biggest assholes in the movie. Doesn’t matter if those are parents from the victims, a teacher who will die a sad but very grotesque way (it made me smile), the only friend Haruka had or the other sad girl from the class, no one will prove to be better, will prove to be a good human being. The film runs head first into this « always more », visually but also in terms of story. More beating, more grotesque or very gory death scenes. Even the thematics of the story, by demystifying the only neutral or comforting elements of our heroine, it’s simply the movie wanted to go one way and one way only. In the end, the only people worth saving are the ones we thought were the worst at first, like Taeko, definitely the most human character of the movie. If the movie wanted to tell us that was its intention, to tell us not to be fooled by appearances, well in that case it does it with a lack of subtlety that weighs down the message quite a bit. Especially as except for Haruka’s family (but they die fast), no one is innocent here, nothing comes to balance their action. It removes some credibility to the film, and undermines the few revelations from the last part of it. Was the manga the same? I don’t know, don’t care actually. Or maybe it’s just Naitô Eisuke who wanted to go that far because he had a comfortable budget! Too bad anyway, because Liverleaf stays a very solid film, seriously made, beautiful filmed. Those who likes blood and snow should check it out. It’s a good, and even at times very good movie. Just too bad it can’t stay at the same level of quality all along.

The film clearly wants to do too much in the last part
Because it always wants to do more, it becomes predictable

So: Liverleaf, it’s a very classical revenge flick, but pretty radical on its way to do it. Very bloody, it’s just too bad that near the end, the film wants to do too much.