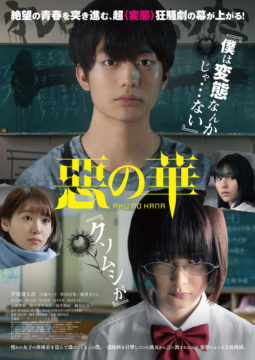 THE FLOWERS OF EVIL

Story: Kasuga Takao is a high school student. He sees his popular classmate Tokiwa Aya reading Charles Pierre Baudelaire’s « The Flowers of Evil » at a bookstore. When Takao was in middle school, he admired the poetry collection “The Flowers of Evil.” As a 2nd grade middle school student, Takao found the gym clothes of popular classmate Saeki Nanako in a classroom. He had a huge crush on her at the time. At that time, Takao sensed someone’s presence near him and, without thought, he took off with Saeki’s gym clothes. The person who saw Takao in the classroom was Nakamura Sawa.

The Flowers of Evil, this is a strange title, a movie I wouldn’t even bet one euro or dollar on it, but a movie I was curious about. Because a manga’s adaptation talking about the usual teenagers, close to become adults, the torments and impulses of those teenagers, it’s not rare, we can easily find, with films or even dramas, probably a dozen if not more per year coming from Japan, and same goes for others Asian countries. But to see that style of manga, with a dark tone and Iguchi Noboru as a director, that’s more surprising, because Iguchi is far from his usual world, from his usual habits. The man who made himself known internationally by making The Machine Girl in 2008, and who exploited the genre with RoboGeisha, Mutant Girls Squad, Zombie Ass, Dead Sushis or even Nuigulumar Z seems to have reached (finally) a turning point in his career. Since 2014 in fact, he seems to accept more films from studios, which means that he often does one film in his usual style like Hentai Samurai, Slavemen or Ghost Squad (I’ll tell you all about this one soon, and it’s a disaster), and between two of those, he made films like Live, Devotion to Cinema, or The Blue Hearts, a film made of several short films as a tribute to the band of the same name. After years of bullshit, Iguchi maybe wants to open up his style, his horizons? To change even? To vary his cinema, to try new things? Good for him anyway, especially since in the case of The Flowers of Evil, the manga has a pretty good reputation (the anime as well), and he didn’t write the script, which saves us the usual trouble of his scripts, of the unique idea stretched over the entire film, especially as the film is a little bit more than 2 hours long. Now, was it a good film? I guess it all depends on your expectations for the film, or if you know the basics of the manga, and to your ability to accept the changes of tone in the film itself, which often goes from tough moments to more comical moments, from almost shocking scenes to silly scenes. At least in the beginning.

So we have here a film which wants to talk about the torments of teenagers by using a whole range of emotions, styles and even genre. At times, we can even have the impression that Iguchi wants to do like Sono Sion, in the description of teenage’s psychology, some torments, or even some ideas, we really have the feelings to be in the heart of Sono’s cinema. But Iguchi is not Sono Sion, he doesn’t have the same talent for filmmaking, even if for once, he delivers a clean film, and even proves that he still knows how to direct actors. And it wasn’t a sure thing at all here, because a lot of the actors come from dramas, or, just begin their career here. We follow Kasuga Takao, a young almost like everyone else, with his friends, his crush for a girl of his class. And when he goes back to school because he forgot a book (book which gives its title to the film), he finds the gym’s clothes of his crush. He panics, he’s feeling watched, and finally steals the clothes and brings them home. The trick is, one of his classmate, spending her time sleeping during lessons and disrespecting authority, using a « flowery » language, saw him, and is going to blackmail him. That’s when starts a strange relationship, a kind of love triangle, between rage, hate, repulsion, submission, manipulation, but also some better feelings. And if i was puzzled for 20 minutes, finally after that, some kinda magic happened. Ito Kentaro is our young shy hero, who spends most of his time being submissive. And who, in the end, will start liking it. He’s doing a pretty good job, even if I suspect he was hired for his cute face to attract young girls in the audience rather than for his acting skills. Next to him, we have the one who submits him, Y-Tamashiro Tina, who was definitely pretty much everyone on screen during 2019, and not necessarily for the best, as she was in the very bad Diner from Ninagawa, and she was also playing Hell Girl in the movie of the same name from Shiraishi (better, but such a short role). Here, even if she will scream a lot, she’s really good. The rest of the main cast will be Akita Shiro, who starts his career here after only one other part in another film, and Itoyo Marie, seen recently in the movie Shirai San, and I already told a lot of good things about it a few days ago.

Despite being a 127 minutes film, maybe a bit too long at times, and ironically a bit too short considering how quickly some events happen sometimes, The Flowers of Evil works very well. The actors are invested, Iguchi manages to surprise us several times, both by being more suggestive than demonstrative (it’s a miracle) and because suddenly, he surprises us in our habits. Some moments are pretty harsh, those that involve perversion or submission of the characters work, and even some softer scenes work well. A few moments are maybe a bit too silly, especially in the beginning, and it made me cringe a little, I admit, but after a few more minutes, it was just fine, it worked better, as if by doing a weird balancing act, Iguchi managed to dose everything well. Yes, in the beginning, the first date between our hero and Saeko, I found the situation cute, Kasuga’s statement was pure, but it was a little hard for me to believe in it. To believe in the start of a relationship when they have only spoken twice and their first date was in a bookstore. And then all of a sudden, without warning, I didn’t pay more attention to it. And as the movie likes to change situation often, to go from a rather silly scene to a harsh one, or even more grotesque, more perverse, with panties, or the destruction of a classroom, or even as announced in the opening scene, suicides, the whole movie works pretty damn well.

Iguchi delivers, technically, maybe his best film. Ok, sometimes it looks like a sweet little drama, but still, a few scenes are surprising, and some more surreal moments as well. Yes, we can say it, technically, The Flowers of Evil is certainly Iguchi’s best film ! And one good thing about the film is that it never back off from the various situations it has to offer, the film finds a good balance between its different elements, styles, tones. And even if their relationship is quite unhealthy, there are also some beautiful moments between Kasuga and Nakamura. Yes it’s a relation based on submission, destruction and perversity, but it has its sweeter moments. And hey, who are we to judge them? To judge what’s pervert or not? Because in the end, I started to appreciate those characters and their relationship. Maybe it’s just the changes in tone in the movie that makes me be kind about it. But no, I liked The Flowers of Evil. A film with a certain complexity in the emotions of its characters, even if it likes to be rough with them on the way. It’s not perfect, Iguchi is not the best director in the world and never will be, but seeing take this film seriously was nice to see.

A serious film from Iguchi
A lot of changes in tone and style
Some surprising and harsh moments
In the end, the casting was pretty good
Some softer moments, pretty

127 minutes. Too long?
A few scenes are too cheesy
Maybe a little time to be in the right mood?

So: Iguchi delivers a studio movie, a manga’s adaptation (oh surprise) about the dark part of teenager’s feelings, with submission, perversions, doubts, destructions (physical and mentally) and so on. A bit too long, a few scenes don’t work as good as the rest, but for once, it’s a good movie, a real good movie.